The Euro came under pressure in yesterday’s trading session against the US dollar after a strong round of data from the US and hawkish comments from the US Federal Reserve boost expectations for a 0.5 percent rate hike next month.

The latest retail sales figure from the US hit the market yesterday at 3.8 percent against analysts’ expectations for a number of 2 percent and well up from last month’s figure of -2.5 percent.

After this we saw the release of the minutes from the Fed where they noted that interest rate hikes likely are on the way soon, and they said the unwinding of the bond portfolio could be aggressive.

A 0.25 percent rate hike is already priced into the market for next month in the US but now some market participants are predicting it could be 0.5 percent as the Fed attempts to reign in inflation which is sitting at its highest level in 40 years and is beginning to take its toll on the American consumer.

The US dollar also received support as a safe haven after mixed signals surrounding the tensions between Ukraine and Russia with the latter claiming they had begun pulling back troops from the Ukrainian border which was refuted by the US side whop said that was not the case and that there are more troops heading to the area.

It’s a particularly quiet day ahead on the economic calendar for the Euro and the only thing that may cause some volatility is a speech by European Central Bank board member Philip Richard scheduled later in the day.

In the American session will see the release of Jobless claims figures and Philly FED Manufacturing numbers from the US with the main focus being on the employment data. 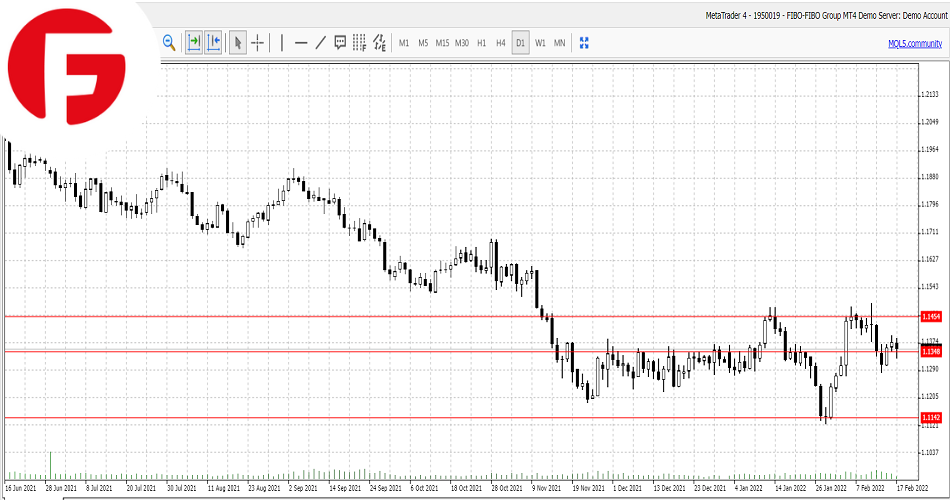 As we can see on the chart, the EUR/USD currency pair has found some support around the $1.1348 mark and unless there is a big flair up in tensions surrounding Ukraine and Russia this level is likely to remain supportive, at least in the short term.

With rate hikes in the US already priced into the market the Euro’s fortunes are probably in the hands of the ECB and only time will tell if they will also jump on board with regards to rate hikes in the Eurozone.