The Euro surged nearly 100 points against the US dollar in yesterday’s trading session after comments by European Central Bank president Christine Lagarde left the door open for a rate hike from the Central Bank earlier than markets expected.

As expected, the ECB left rates on hold at 0% but it was the following monetary speech that caught traders off guard and sent the Euro to its highest level against the greenback in over a month.

Mrs Lagarde, once again presented her dovish stance to the market with regards to the European economy but investors weren’t buying it as she added the phrase “rising inflation will last longer than originally expected” which left many predicting that the ECB will need to act earlier than expected to reign in inflation which will mean a reduction in their stimulus program followed by a rate hike.

The Euro was also helped later in the day by disappointing economic data from the US such as Gross Domestic Product figures released by the US Commerce Department which hit the market at 2% against analysts’ expectations for a figure of 2.7% and well down on last month’s number of 6.7%.

The main drivers of the EUR/USD currency pair today will kick off during the European session with the release of preliminary Consumer Price Index data from Eurozone, which is expected to come in 3.4%, slightly down from last months figure of 3.7% Also important will be the initial Q3 GDP data for Germany and the Eurozone which is also expected to weaken from last month with analysts predicting a figure of 2.0% versus 2.2% in the month prior.

To finish off the trading week, will see the release of the Core Personal Consumption Expenditures Price Index for September which is forecast to come in at 0.2% from 0.3% last month. 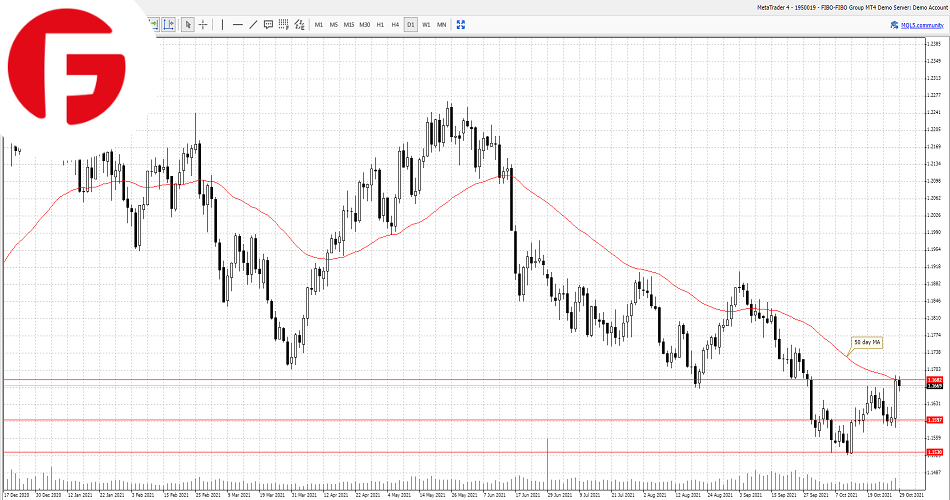 The EUR/USD currency pair faced a double whammy in yesterday’s trading session, and it approached the 2 key resistance levels of $1.1682 and the 50 day MA which it was unable to breach.

As we enter the European trading session today, we can see on the chart that the currency pair has been rejected at this level and has pulled back slightly as we await the crucial economic news from the Eurozone and the US.

Unless the news from the Eurozone surprises heavily to the upside, it is hard to see these key resistance levels being broken as the trading week comes to a close and the chances of a bit of profit taking and the Euro drifting lower before the end of the day is a distinct possibility.