The Euro has made a strong recovery in today’s trading session against the greenback after coming under pressure yesterday on the back of strong data released from the US which keeps the case alive for rate hikes by the US Federal Reserve.

The US Bureau of Economic Analysis released a report that showed the Core Personal Consumption Expenditures which is the Fed's preferred gauge of inflation, rose to 4.7% year on year in November, beating analysts’ expectations fore a figure of 4.5% and up from last month’s figure of 4.2%.

New Home Sales figures also came in strongly hitting the market at 12.4% in November while Durable Goods Orders rose by 2.5% which was well above expectations for a figure of 1.6%.

As we look ahead today, there should be little movement in the EUR/USD currency pair due to the Christmas break and the closure worldwide of financial markets and the only thing that may cause some type of volatility will be any new developments regarding the Omicron variant of the coronavirus.

On a good note, scientists have so far confirmed that although the omicron virus is highly contagious, people who contract the virus are far less likely to be admitted to hospital compared to people who caught the Delta variant of the virus. 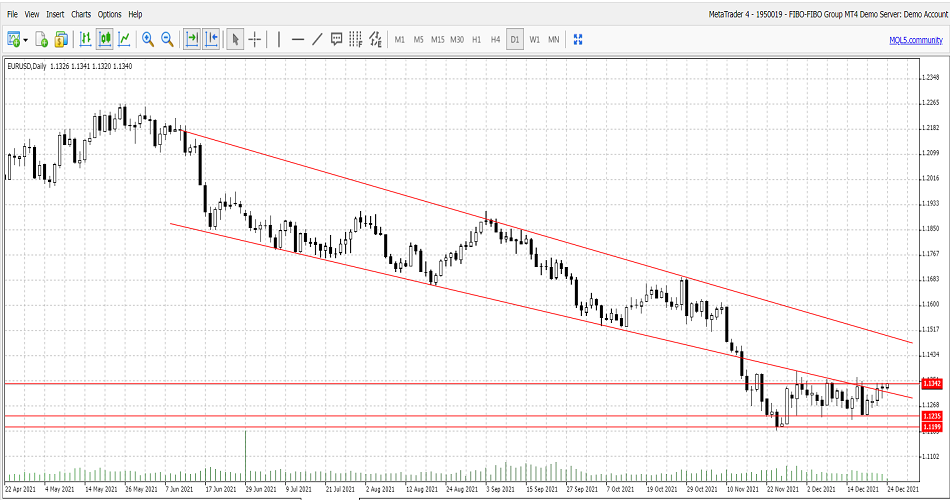 Looking ahead a little further into the new year, the Euro is likely to find itself once again at the mercy of the ECB which sees the current uptick in inflation as temporary and has expressed less concern about inflation pressures than most other major central banks.

This was reflected in the ECB's December monetary policy meeting, where the central bank gave no indication policy rates would rise any time soon.

This divergence between a dovish ECB and a bullish US Federal Reserve who are on track to raise interest rates in March leaves the Euro vulnerable as investors pile back into the US dollar for the higher yield.