The Euro suffered a double whammy in yesterday’s trading session which forced the European currency to a new 20 year low against its US counterpart after disappointing data from the Eurozone and news on the next boss of the US Federal Reserve.

President Joe Biden's decision to nominate Jerome Powell for a second term as Federal Reserve chairman boosted the greenback as Powell is currently seen as a safe bet during times of crisis such as the Covid pandemic and the news was welcomed by the financial world as a whole.

From the Eurozone we saw the release of the latest Consumer Confidence figures which hit the market at -6.8 against analysts expectations for a figure of -5.5 foreseen by analysts which was probably driven by the uptick in Covid-19 infections occurring over the past several weeks.

Several speeches by European Central Bank board members also didn’t help the Euro’s cause and Latvian central bank and ECB Governing Council member Martins Kazaks noted that as long as price pressures are transitory and supply-side shocks are temporary, monetary policy should remain unchanged. Bank of France Chief, Francois Villeroy, also reiterated that the current “hump” in inflation is transitory and the ECB should be patient regarding tightening monetary policy conditions which means there will be no hurry to lift interest rates.

Looking ahead today, the main drivers of the EUR/USD currency pair will be the release of PMI figures from Germany and Eurozone as a whole and later on in the day, we will see the same news from the US and if the Markit PMI numbers from America come in strongly and confirm inflation fears the currency pair is likely to see further losses. 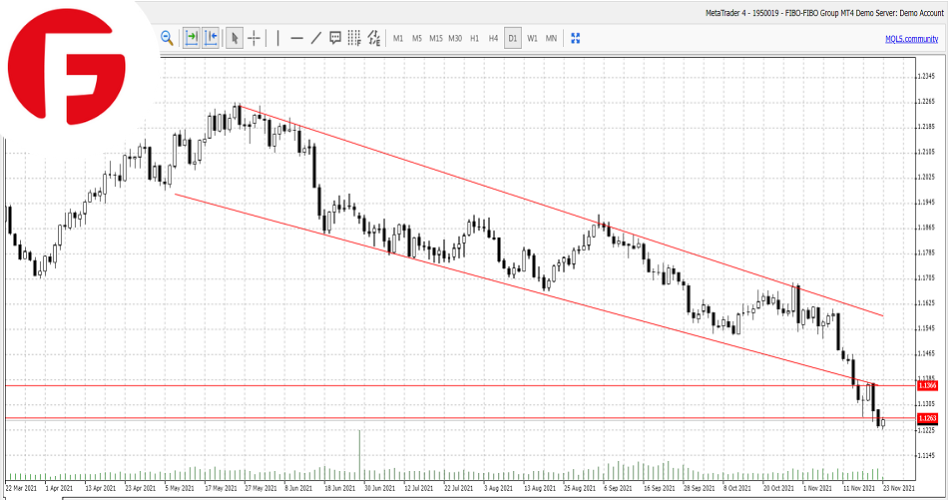 The number of COVID-19 infections rising in Austria, Germany, and Eastern Europe is rising alarm bells throughout the Euroblock and the German Chancellor Angela Merkel noted that the situation in Germany is worse than anything they have seen so far which all points to another total lockdown in Germany to contain the virus and will be terrible news for the Euro.

Some ECB board members are now calling for the PEPP QE programme, which was introduced to counter the effects of the COVID pandemic to be extended past March next year to help battle the current situation.